If you’re the ultimate homebody—Whittier, Alaska may be your dream destination. Whittier started out in the mid-1950’s as a military outpost. In recent decades, civilians have begun to trickle into a former army barracks at the heart of the town called Begich Towers. Begich Towers is currently home to 75% of Whittier’s 300 permanent residents. Begich Towers serves as a cozy condominium which features a post office, general store, police station, laundromat, hospital, mayor’s office, and a heated indoor pool. Whittier’s school is connected to Begich Towers by an underground tunnel, so young residents never have to brave harsh wind and snow on their way to the classroom. Begich Towers also features a small bed and breakfast so that visitors can experience Whitter’s warm sense of community. 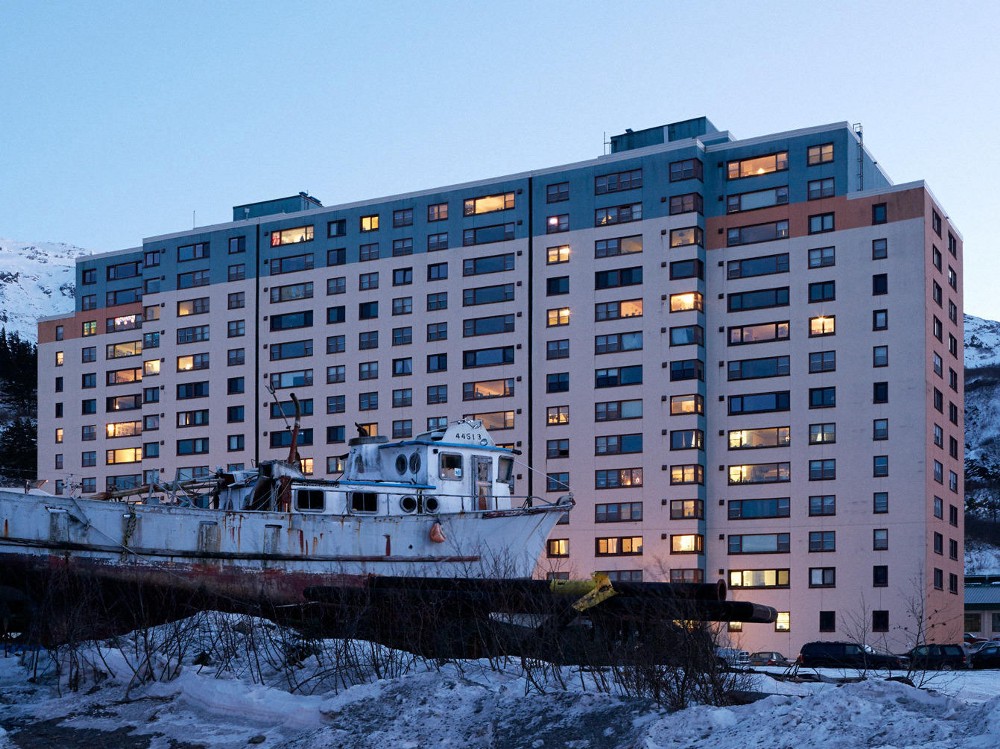 The 14-story building is a former Army barracks built in 1956, yet it houses all the amenities you’d expect from a small town: a laundromat, health clinic, corner store, police station, church, video store, city offices and the homes of nearly 200 residents.
Photo via California Sunday Magazine

Whittier is relatively close to Anchorage, Alaska—but it is still difficult to access. Whittier is only accessible by boat, and a single drive through tunnel which periodically alternates directions. The drive through tunnel closes every night at 10:30 pm. Whittier residents who ventured to Anchorage for an evening of fun, and missed the 10:30 tunnel cut off time have been known to spend the night in their car. Most Whittier residents love the tiny town’s remote status. Whittier is surrounded by breathtaking mountains and home to majestic animals such as reindeer who live in a small enclosure just outside of Begich Towers, and humpback whales who frolic in the pristine waters of Prince William Sound. 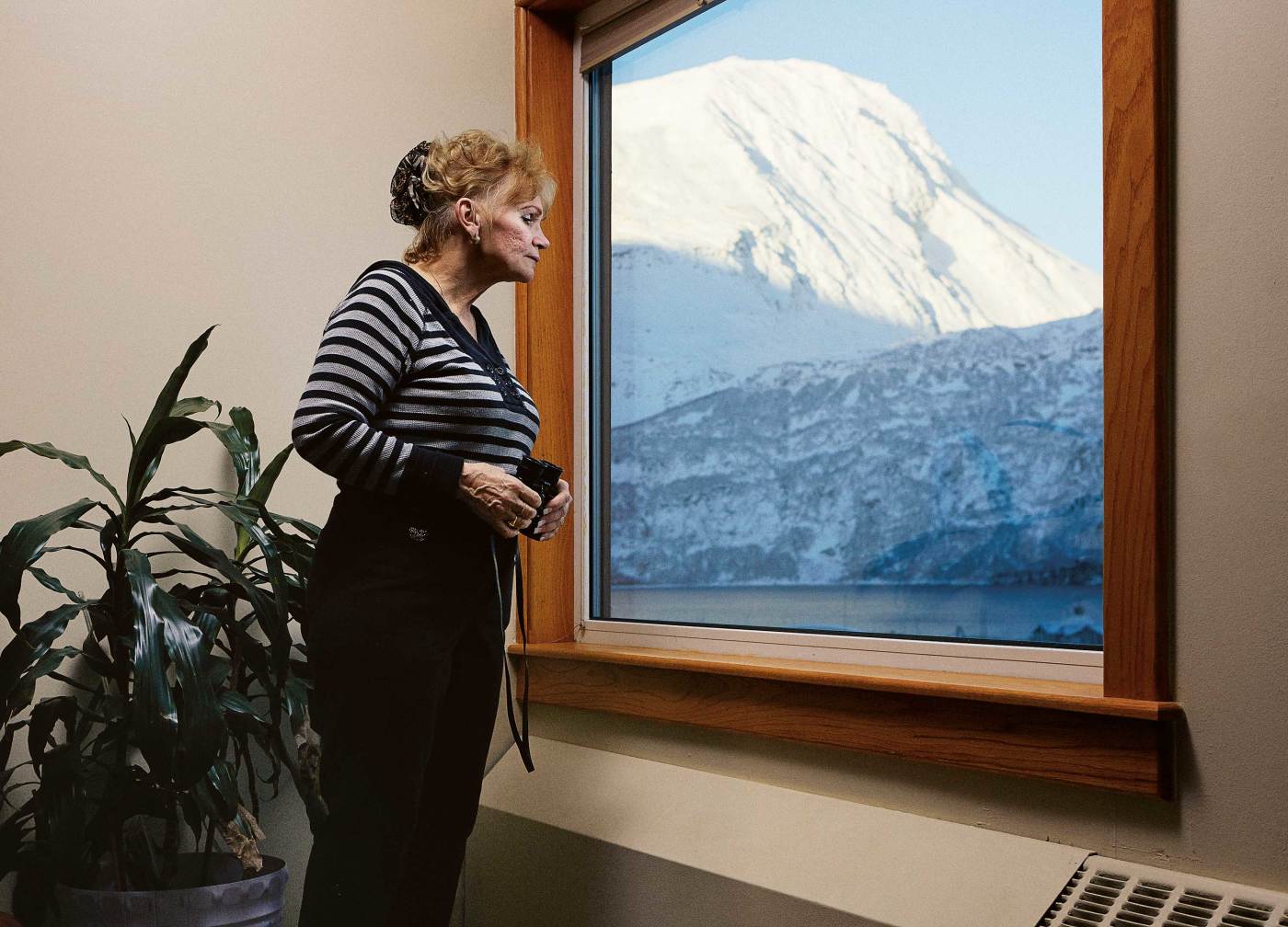 One Begich Towers resident who works as a teacher at the local school stated that life in Begich Towers is actually more akin to life in a big city than a remote small town. Begich Towers is essentially a fully functional condo that is equipped to take care of most of the residents needs in-house. Begich Towers residents rarely have to brave Alaska’s icy winds and blinding snow at the height of winter if they don’t want to because virtually anything they may need is conveniently located a few short minutes from their doorstep. Begich Towers residents can even set up a meeting with the Whittier mayor, police chief, or head physician without reaching for their coat and scarf. Wealthy residents of New York who pay big bucks for condos with in-house amenities could only dream of such lavish luxury. 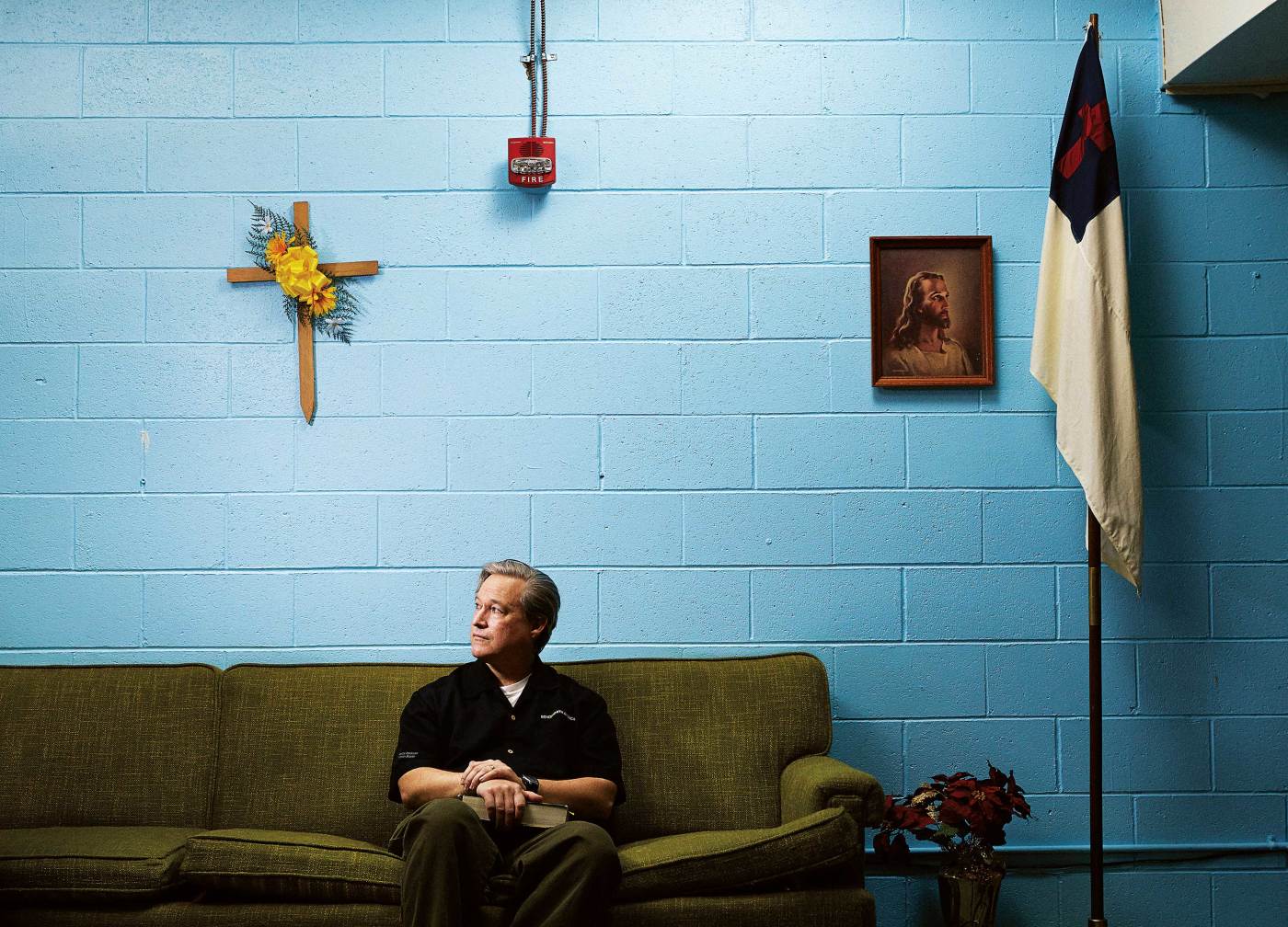 Until he moved away, Pastor Kevin Jones, a Southern Baptist, presided over a mostly Catholic congregation. 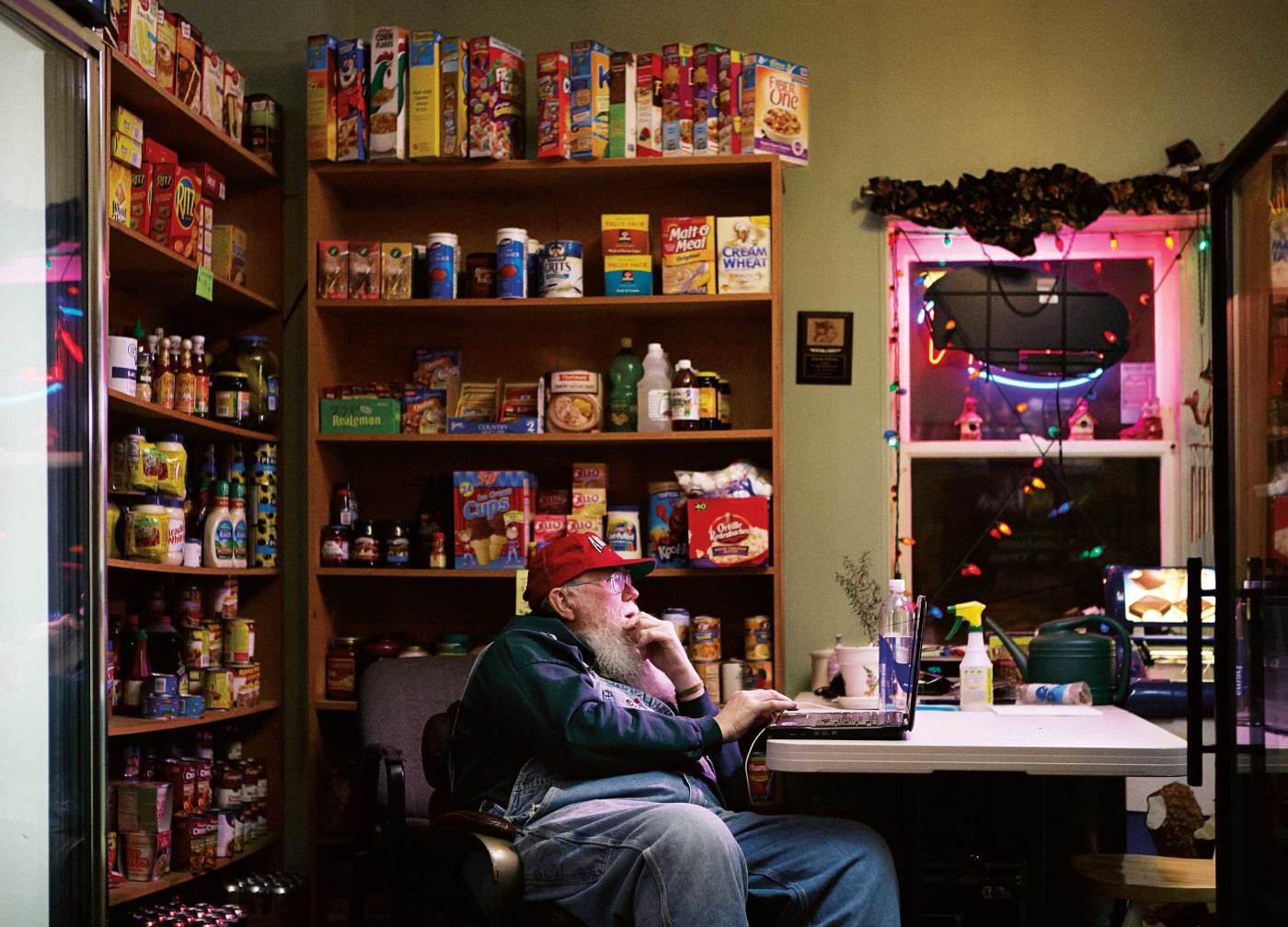 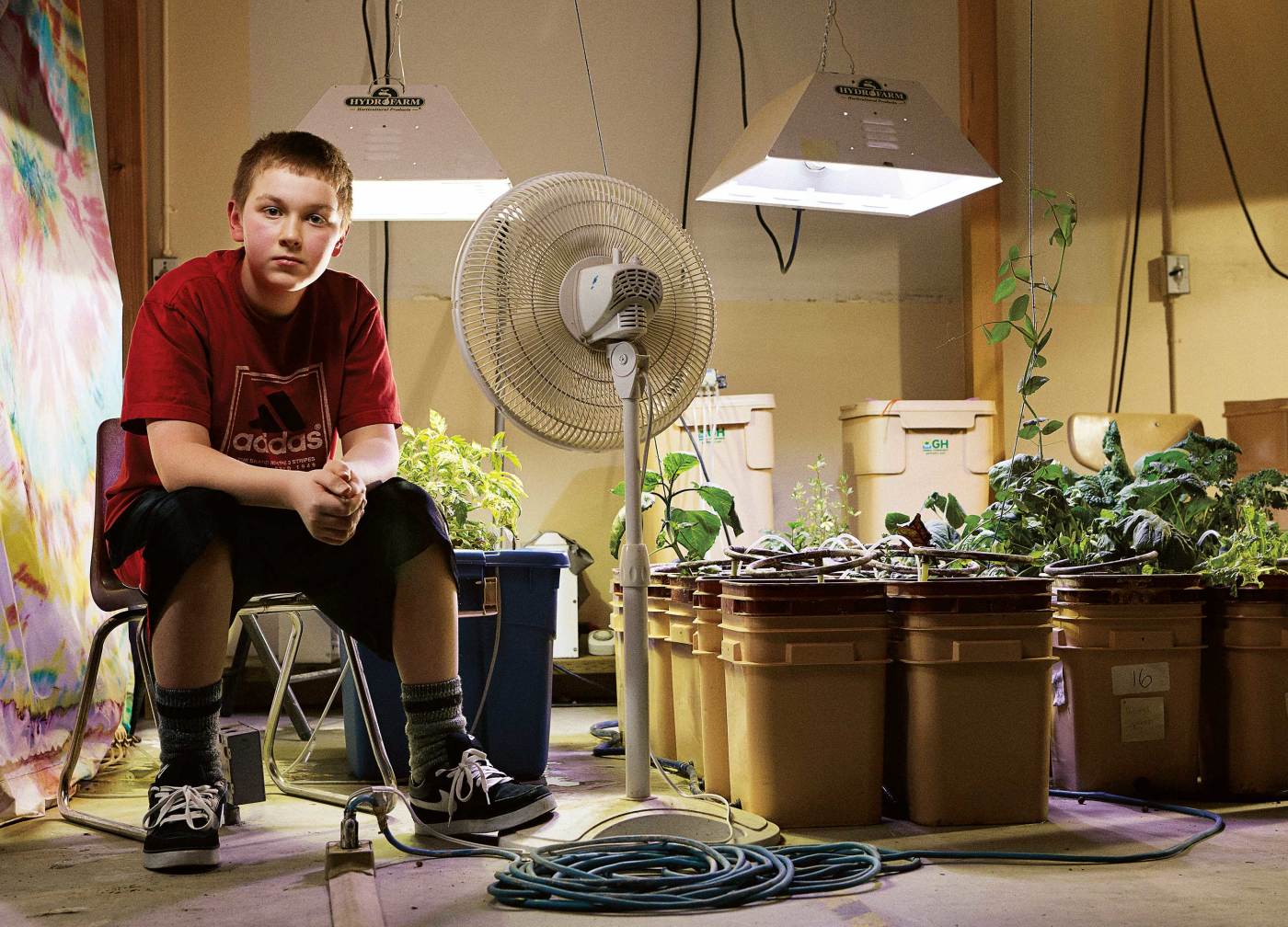 A pot bust on the tenth floor led to the police donating hydroponic equipment to Whittier’s school for a vegetable garden, which Joey Lipscomb oversaw through eighth grade. 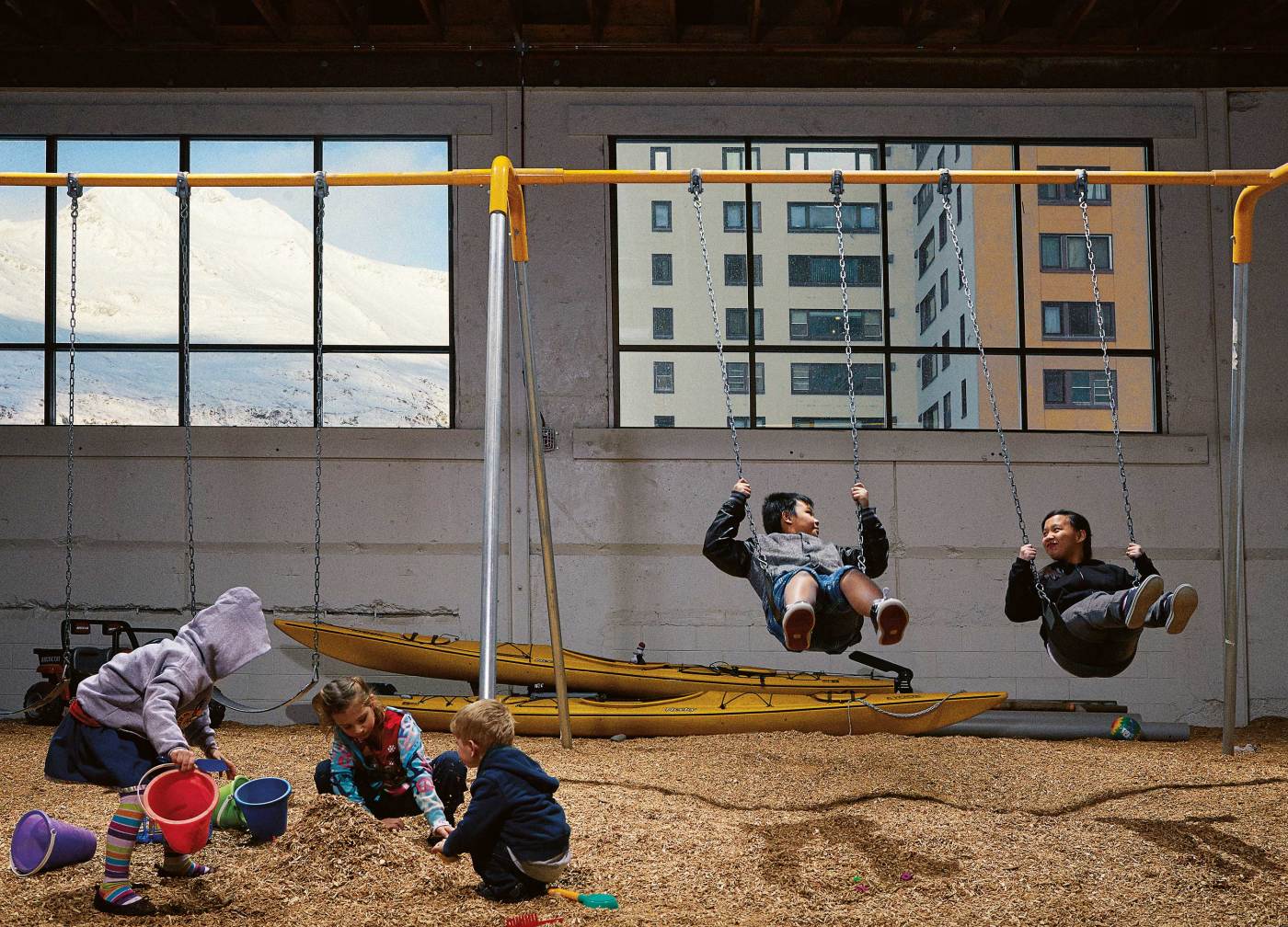 Because the winters are so ferocious, the town’s only playground is indoors.

During the summer months, when the sun shines 22 hours a day—visitors from around the world who are curious about life in Begich Towers flock to Whittier. A museum about the Japanese occupation of Alaska during World War II, an abandoned army barracks called the Buckner Building which once housed Whittier residents as Begich Towers does today, and a handful of delectable restaurants that serve fresh seafood are some other points of interest. Paranormal enthusiasts claim that the Buckner Building is haunted by restless spirits. The state of Alaska is rugged and beautiful beyond compare. Charming small towns like Whittier are one of many reasons that Alaska is a place that every seasoned traveler must visit at least once.