The Cotswolds are some of the UK’s most family-friendly destinations, offering fun activities for adults and kids. With stunning medieval villages and gorgeous countryside, visiting The Cotswolds is a fun adventure for families. And while the region is home to many family-friendly cottages with amenities dedicated to kids, you’ll find plenty of options if you prefer to stay in a unique place. Here are some unusual places for a family escape in the Cotswolds.

Castle Combe is a picturesque English village often dubbed one of England’s prettiest villages. Set in a stunning location, Castle Combe is a popular filming location in the Cotswolds and a must-visit for families looking to enjoy a scenic break. It’s a fun place to stroll around, where you’ll enjoy stunning views and pass along bakeries selling delectable homemade cakes and sweets. 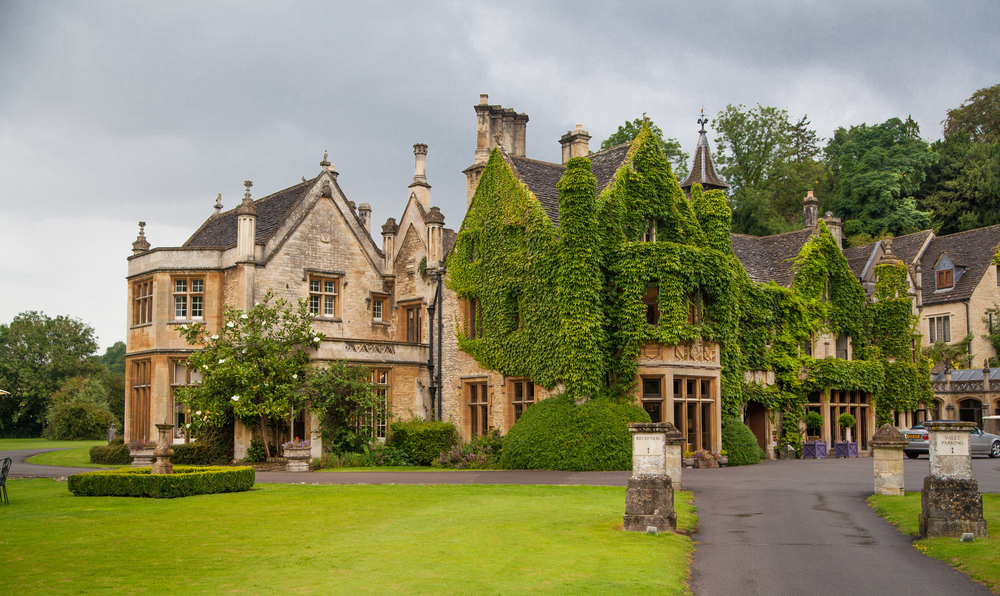 Castle Combe was named after the castle from the 12th Century that once stood in the area. Combe is an old English term meaning a short valley. What makes this place unique is it has managed to retain its old-world charm, with many of its chocolate box houses still intact. The village is about 500 years old and has no new structures.

There are plenty of fun activities to enjoy when staying in Castle Combe. You can explore the Dower House, famously known as Dr Dolittle’s house. The striking yellow house is among the first buildings you will see as soon as you enter the village. Check out the bridge over Water Lane, the village’s most iconic viewing point. It’s one of Castle Combe’s most photographed spots and a lovely place to enjoy an early morning stroll.

Broadway is one of Cotswold’s most unique places to stay. Often dubbed the “Jewel of the Cotswolds”, Broadway is a lovely village offering loads of things for families to enjoy, from climbing the Broadway tower to exploring the hidden Millennium Garden and hiking along the Cotswold Way Circular Walk.

One of the best ways to explore Cotswold’s stunning countryside is to hike along the Cotswold Way Circular Walk, starting at the village of Broadway to the Broadway Tower and back. Once you get to the Broadway Tower, make sure you climb to the top to enjoy a panoramic view of the village. The tower is perched on top of Cotswolds’ highest hills, offering spectacular views from its platform.

One of the best places to take your little kids in the Broadway village is the Millennium Garden, tucked in a hidden section of Broadway and offering mesmerising views of the Cotswolds hills. After all the fun adventures, the best way to end your day is to stuff yourself with some tasty fish and chips at Russell’s Fish and Chips, one of the most popular dining places in the Cotswolds.

Oldbury-on-the-Hill, known simply as Oldbury, is a pretty little village in the Cotswolds and one of the region’s best places to stay. Home to quaint chocolate box cottages with breathtaking views of the surrounding countryside, Oldbury is the perfect base to explore the Cotswolds.

Oldbury is famous for the St Arild’s Church, a tiny church perched on a hill overlooking the flat terrain of South Gloucestershire. There’s a Manor Farm right next to the church and a few houses scattered from each other. The church was built in honour of St Arild, a local martyr who fought the power of sin. She lived by a holy well in Kington and resisted the advances of Mencius, who eventually cut off her head. St Arild was buried beside the holy well, but later on, her bones were moved to the Gloucester Cathedral.

Lying halfway between Cheltenham and Cirencester, Oldbury has plenty of holiday cottages well-suited for families. If you want to splurge a bit for a more relaxing break, consider staying in a luxury holiday cottage in the Cotswolds, and you’ll find many of these cottages in the village of Oldbury.

Naunton is another beautiful village with family-friendly attractions, such as museums, stately homes, and gorgeous gardens. Sitting in the Cotswolds hills and flanked by the River Windrush, Naunton offers some of the region’s most stunning views. The scenic Windrush river winds along the valley lined with chocolate box cottages leading up to the hillside. A short walk will take you to the hills offering striking views of the village and the surrounding countryside. 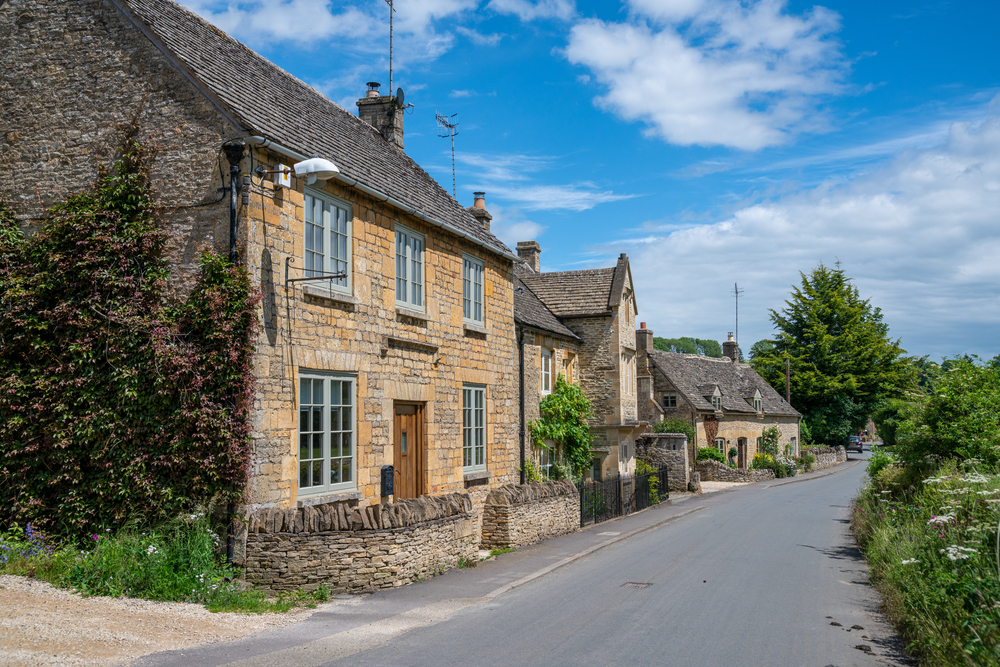 One of the most notable attractions in Naunton is the church of St Andrew, a beautiful historic building featuring a medieval sundial and gargoyles along the church tower’s windows. Another interesting sight is the 17th-century dovecote along the riverbank, which has more than a thousand nesting holes owned and restored by the villagers through the Naunton Village Trust. 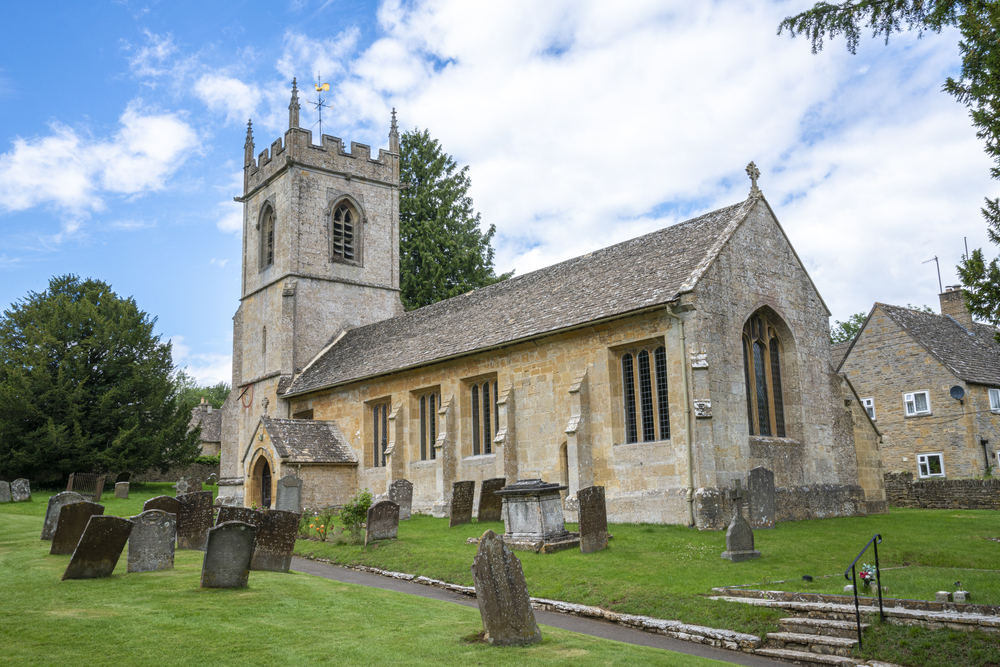 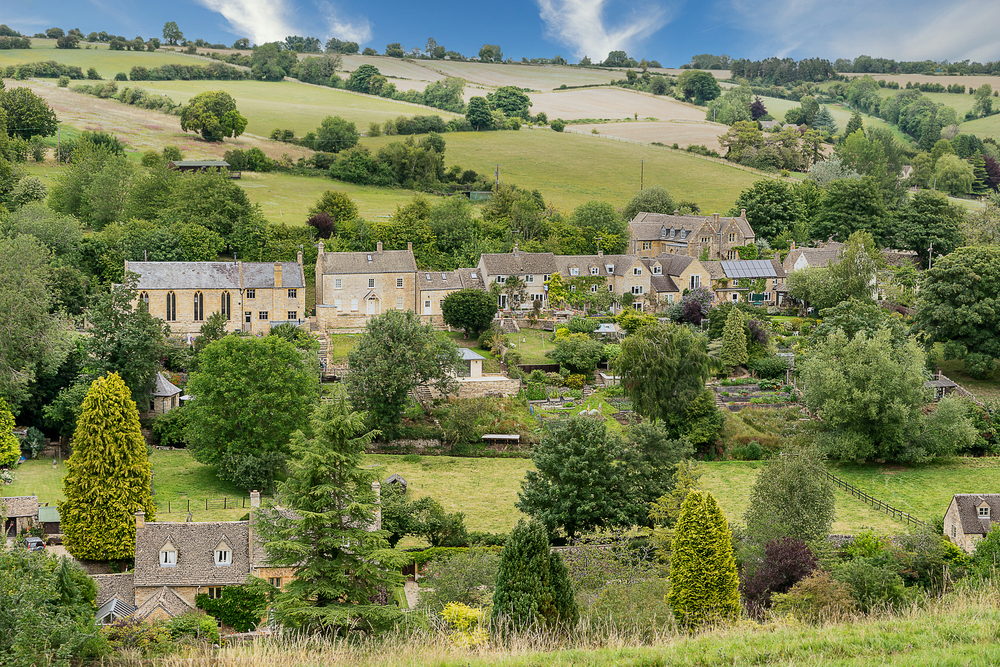 The Cotswold village of Taunton
Photo by depositphotos.com

Naunton is one of the country’s oldest settlements, having been mentioned in the Doomsday Book a thousand years ago. While it is a small village, it’s worth spending the day strolling the area and soaking up its lovely atmosphere. You can also visit the nearby Stow-on-the-Wold, where you can go on a short trek towards the top of the hill with views overlooking the countryside.

Bibury is a typical Cotswold village, with chocolate box cottages surrounded by stunning countryside views. This charming little village is home to only 600 inhabitants, yet it sees thousands of visitors yearly. Described by William Morris as England’s most beautiful village, Bibury is a great place to stay in the Cotswolds. 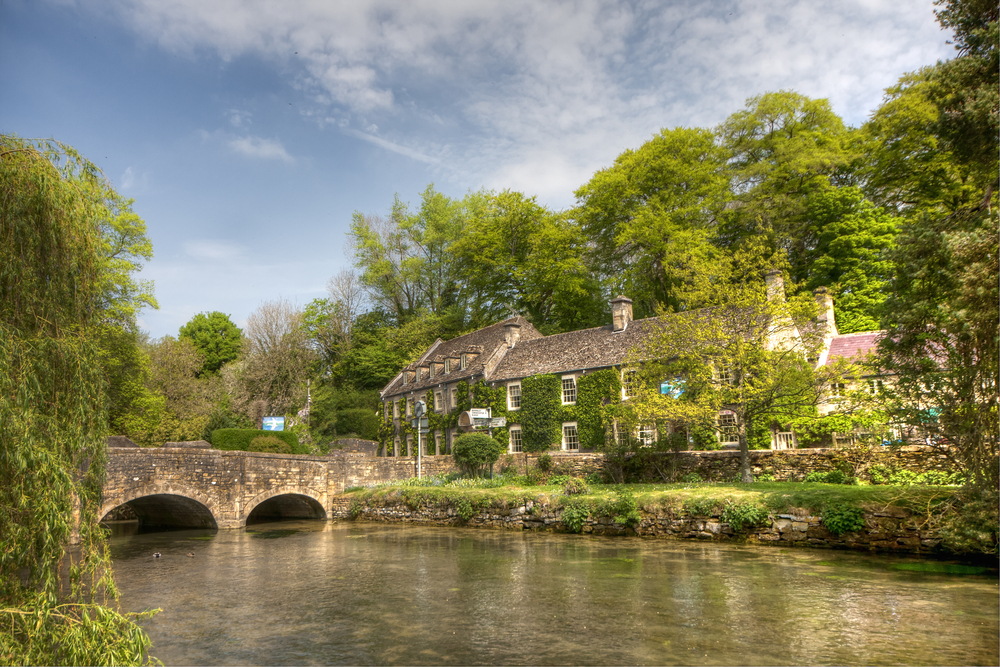 Bibury is unique as it consists of two small villages, with the river Coln in the middle. The other side is Arlington village, where you’ll find the Arlington Row of former Weavers’ Cottages. The history of Bibury dates back to the last Iron Age, with remains of a hill fort perched above it. Each year, Bibury is bursting with thousands of visitors who jostle with each other to capture the best views of the lovely cottages.

One of the attractions to see in Bibury is the St Mary’s Church, which features some signs of Saxon origins. Its churchyard is of special interest due to the remarkable survival of the carved tombs and headstones.